American Express is a credit card company on a social media mission.  In addition to having a presence on Facebook, Twitter, Foursquare, YouTube, LinkedIn, Google+, the company makes sure that they are actually providing their customers  with relevant and exciting promotions/incentives.  The key to making a social network successful, is not only being present but creating buzz, and a platform that people actually use/want your promotions.  Below are 3 key ways that Leslie Berland, SVP of digital partnerships and development at American Express, believes the company is effectively using the social media space.

For more information, read the full article at: http://mashable.com/2012/03/28/american-express-social-media/

The annual South by Southwest conference is the place to find out about the new, intriguing and fabulous technologies hitting the market.  This five day conference includes over 900 keynotes, panels and workshops.  Here are Adweek’s 5 trends that are worth paying attention to:

For more information, check out the full article: http://www.adweek.com/news/technology/heading-sxsw-5-trends-watch-138805 Facebook’s new Timeline format will be mandatory for all businesses within the month.  In order to get the most out of this new format, Mashable has put together 6 tips that will make the changes most beneficial for your brand.

For more information about these changes, along with Mashable’s recommendations, go to: mashable.com/2012/02/29/facebook-brand-timelines-changes-marketing/

There are very few marketers like Coca-Cola, who have millions of dollars to spend on advertising and can test ideas out and the company won’t collapse if the campaign isn’t as successful as it was meant to be.  The great thing about social media is that companies small and large can participate and can have a somewhat even playing field.  All company Facebook and Twitter pages look the same, all you need is an entrepreneurial spirit with big, creative ideas to compete on these platforms with the mega-companies.  Here are a few great social media examples from large and small companies:

The moral of the story is, whether your company is big or small, has a large budget or an almost non-existent one, social media makes it extremely easy to get your brand, product and name out there.  For more information about these campaigns, go to: http://mashable.com/2012/02/26/clever-social-media-campaigns/

HelloGiggles is a refreshing new website that aims to empower, inspire and entertain smart, independent and creative women.  With all the negativity online, co-creators,  Zooey Deschanel, Molly McAleer and Sophia Rossi, wanted to create a place where people can connect in an entertaining and supportive environment.  The site is heavily editorial but does have some fun interactive features like crafts, recipes and “how-to” tips on various topics including getting along with roommates and taxes and of course a place for laughs and giggles.

The site strictly enforces a “no gossip” policy, along with no cursing and does not allow alcohol sponsors.  The editorial articles all drive conversation by providing lessons and/or positive take-aways for the reader.  The site’s primary audience is women from 13 to 35, but it does not exclude men who want to play in the positivity pen.

For more information, visit the site at HelloGiggles.com 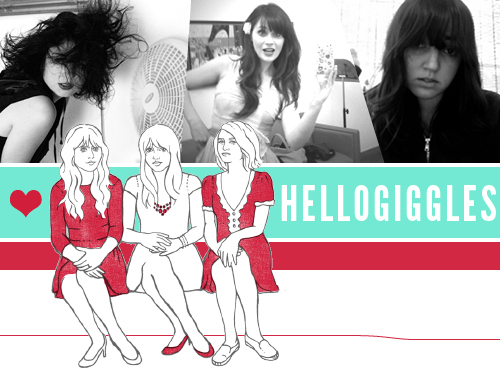 Valentine’s Day has come and gone and now it’s time for singles to re-focus.  Zoosk is positioning itself as the “LinkedIn” of internet dating sites.  Instead of typical straightforward process of setting up a profile, finding dates, picking a partner and getting offline (similar to what Monster.com does for job searches), Zoosk wants people to stay on their website even when they are coupled up (similar to LinkedIn where your profile is active and updated throughout your professional career).

Zoosk wants to incentivize members to keep their profile up on their site by offering a host of features and services that make the site more “sticky” to couples.  These incentives include reminders of key dates including birthdays and anniversaries, deals on “couples” activities as well as an advice center.   Zoosk already integrates a variety of social networks into its site, which is why there is some 15 million monthly active users.  This functionality will also be beneficial when rolling out their new features.  For example, when a user finds a partner they can change their relationship status and the couples features will automatically begin to appear.

For more information on Zoosk and it’s plans, go to: http://mashable.com/2012/02/14/why-zoosk-wants-to-make-online-dating-more-like-linkedin/ Pet owners are some of the most engaged people on the web recently.  New websites are continually popping up that provide pet lovers with pet-specific news and entertainment, and let’s be honest who doesn’t love pet videos on YouTube?  Technology and the internet are also starting to play a large role in pet care marketing.  Whether it’s a site that encourages social engagement, useful apps or better more efficient ways to order pet supplies, this is a new thriving marketing.  Below are 4 ways that digital marketing is making a play in the pet world.

For more details about pet marketing, go to: http://mashable.com/2012/02/13/pet-industry-digital-social/

There are many of us who wait for our Tuesday mail, sift through all the circulars, cut out the items we are interested in and keep them with you just in case you need a reminder of what you are looking for when you actually get into the store.  Well, Walgreens is looking to improve this system and is taking the somewhat antiquated circular to the social scene.  Walgreens has partnered with LocalResponse to provide customers who check-in (via Foursquare, Yelp, Facebook and Twitter) with a peak as to what’s on sale via a Twitter response or check-in deal.

The company’s first test was with cough-suppressant Halls.  Walgreens sent out over 5,000 Halls messages via Twitter to check-in customers, during January.  Another test that has done well for the company and it’s products is check-in deals, specifically via Facebook and Foursquare.  Most recently check-in deals have donated a free flue shot to charities on consumers behalf, as well as provided mobile coupons for Energizer.  Energizer reps have said that they saw a higher redemption rate with these check-in deals then with traditional digital coupons.

Walgreens is the first and the only retailer to utilize LocalResponse and from the initial tests, this looks like it’s going to be a very happy relationship.  Have any of you checked-in at Walgreens? We would love to hear your experiences.

For more information about this partnership, go to: http://adage.com/article/digital/walgreens-a-mobile-check-acts-a-circular/232584/ Pinterest is a 2-year old social bookmarking site that allows users to collect, organize and share things they love on the site’s pinboards.  Whether you are interested in ideas for your home, recipes, wedding inspiration, clothing or feel-good quotes, this site’s members “Pin It” bookmarking tool keeps interests on and offline easily organized and accessible.  This site, which has a 58% female membership, has started making huge waves lately and retailers are definitely seeing a difference in the amount of traffic to their sites.

The site’s traffic increased fourfold in 3 months between September 2011 and December 2011, bringing the number of unique users to 7.51 million in December alone.  This has put Pinterest as a top five referrer for HGTV, Nordstrom, West Elm, and ModCloth.  Pinterest users also have the ability to share their pinned interests on Facebook, which definitely enhances the site and pinned item’s visibility.  Although the site is a huge traffic driver, research is still limited as to how and if these visits produce sales.

If you are one of the few not yet on Pinterest and want to get started, here is a great article on 21 Must-Follow Pinterest Users.

For a great article from Mashable go to: http://mashable.com/2012/01/29/pinterest-retail-infographic/

Picture from Mashable.com via monetate (@Monetate)

Valentine’s Day is just around the corner.  Even if you aren’t counting down the days, it’s hard not to notice stores red and pink candy and stuffed animal filled sections that have popped up all of a sudden.  One business that is always in fashion on Valentine’s Day is jewelry.  MobileMarketer.com believes that the best way for jewelers to be successful this year is to evoke emotion with their ads and not to product-push.  The ability to use mobile sites, applications, banner ads and SMS allows marketers to inspire feelings for their loved ones and make this year’s jewelry purchase an emotional one rather than an obligatory one.

Consumers should be prepared to see a lot more jewelry-focused apps.  For example, Tiffany & Co. have created the “What Make Love True” app which allows users to discover secret adventures, surprising love stores and useful love tips.  It also encourages couples to share their romantic journey with friends by adding their initial and a note to special places on the site’s Love is Everywhere Map.

Since consumers are relying on their smartphones more and more, these dedicated apps and websites help consumers to search, browse, buy or find the closest store with that perfect piece of bling.  The sites also offer the jewelers that opportunity to engage with their customers by sending location-based offers and messages, encouraging them to come into the brick and mortar store.

For more information about making your Valentine’s Day one of the best yet (jewelers and consumers), check out the full article at: http://www.luxurydaily.com/emotive-mobile-advertising-imperative-for-jewelers-this-st-valentine%E2%80%99s-day/